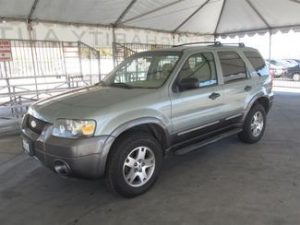 Do you drive a older car that is getting to that point where you need to decide to do the car repair or replace? I do! Actually we drive 2 older cars. A 2006 honda civic and a 2005 Ford Escape. Both have been great cars for us but are getting up there in clicks. The escape has 240,000 km on it while the civic is rocking a hard 330,000k.

The civic has been an absolutely amazing car! They hold up to their reputation. Our only major car repair was replacing a oil pan on human error when she drove over a big log…….. haha. Civics aren’t off road vehicles, don’t do that! Other than that we have the routine oil changes and have flushed the air conditioner. Her civic is still going strong and I believe in driving cars into the ground so wont be switching this up until a major repair. Once we need to buy a new car there is no question though, it will be another civic.

My Ford Escape has some issues though. Its got a minor cracked windshield (at bottom where windshield wipers sit). There is a cracked exhaust pipe somewhere under the hood that needs to be welded for about 150 bucks and some minor rust spots. The cracked glass doesn’t bug me at all, but would need to get fixed next year before certification. (Approx $300) I was planning on fixing this minor crack in the exhaust when I had to get my emissions test done before the middle of next month. Now its the great debate though.

About a month ago I was driving down the highway and my car just died, luckily right at a service station so I just pulled right in. I thought a belt broke but once I popped the hood and restarted the car, everything was fine. It was almost minus 40 out and I was at a quarter tank. I filled it up and drove home. No check engine light or anything.

2 weeks later the car check engine light came on and mechanic said it was something with fuel injector, he suggested just resetting it and see if it comes back. A week ago the light came on but I drove it all over the place and it ran great. Tuesday it was really weird, while leaving our neighborhood the engine power kept throttling and shutting off. I got it home and called the mechanic. He suggested it might need a tuneup but hes booked until next Tuesday.

As I stated earlier I believe in just driving cars into the ground, but I think the value of my suv is about $2,000. If the car repair costs $1,000 bucks to get the tuneup, weld that exhaust pipe and pass the emission test is it worth it? This is always the crazy question, say I fix this and 2 months later something else pops up for a couple hundred. I’m pretty close to the total value of my car, especially when you consider we could get like 300$ scrap value for the car. I guess its a waiting game until next week to see what the mechanic says, but we have started window shopping for a new suv.

Ok wait… not a new car, a new to us car! I’m sure you have read it a million times now, a car loses a tonne of its value once it leaves that dealer parking lot. That new car smell? Ahhhh it ain’t for me. Ill throw one of those pine tree air freshener’s on the mirror and save myself 10,000 bucks! I want a car with some minor scratches, a little dirt on the floorboards and a broken in engine. Let someone else lose all that money the first couple years.

I was chilling with some neighbor’s last night watching the leafs win another game and they were shocked to hear I wouldn’t buy a new car. Its funny in our neighborhood everyone has nice cars to go with the nice houses, while our driveway has those 2 “old” cars. Oh a new car is better if your going to keep it a long time, those finance rates are great now etc etc.. Its hard to tell people, we buy our cars with cash and a couple years old to get good value. 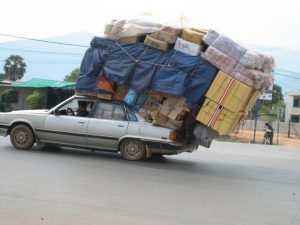 Budget and Needs Vs Wants

My wife is totally against a van but she wants something bigger than a escape. We go away camping a couple times a year and the escape was always packed with our stuff, our son, the dog and the 2 kayaks on the roof. She says its not doable with our daughter now. No debating that, maybe we will stack everything on the roof like this car.

I set a budget of $10,000 max. Normally I like to buy around 8k but financially we are getting better so why not. We have about 5k cash now and I will either sell some precious metals or stocks to cover the difference. Some dealers even offer 0% financing, if we end up buying from them I’ll consider this. Its harder to barter when you don’t have the money though! A quick flash of 10,000 cash can surely make the sale go a little “smoother” 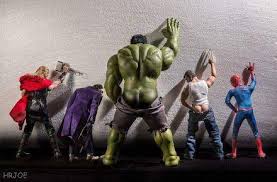 Its the classic debate. Is bigger really better? Being a average guy I say no! As long as it gets you to that point right? She likes the gmc acadia. Its a 7-8 person suv but its also a gas guzzler. Its average fuel would cost $1000 more a year than the escape. I cant justify that for the occasional trip we take. We could always take 2 cars if need be, most trips are 1-3 hrs away. I don’t need a monster suv just for me to go back and forth to work. Luckily the acadia seems to get a lot of costly repairs too. One thing I mentioned while looking at them, the engine under the hood is packed so it would be hard for repairs. For 10k we could get a 2010 or 2011 with around 160,000km on it.

There is no escape….. I keep going back to the ford escape, while it isn’t a bigger vehicle the fuel economy has actually gotten better than my current year. It is big enough for what we need, other than big trips. We have talked about getting a popup trailer some day for camping and this would fix the storage issue in the future.

For 8-10k we could get a lot more value. There is a tonne of escapes out there. We have seen 2010’s with 60,000 km on them all the way to 2013’s (the new body style) with about 140,000 km. I’m really not picky and will leave the pick somewhat in her hands. She will most likely get this for taking the kids around and I’ll downgrade to civic nation. Color is the one thing we are picky on, I don’t want no plum crazy purple or brown/ gold car colors. Bluetooth or Aux in would be nice for listening to podcasts as well! Of course the car has to be good mechanically.

The bonus of buying another escape is I already got some sweet winters on rim’s which could most likely be used on the new escape.

We got to watch though, buying cars is definitely a emotional process. Heck we are already shopping around and my car could be a simple fix! The key is setting a budget and sticking to it or even better going under it. I have bought 2 cars in my lifetime, the first we financed 2 years old and the escape I bought 4 years old with cash. I bought this stupid warranty thing at the time which was a huge waste of money and I wont be doing that again. You learn, Dave Ramsey calls it Stupid Tax!

I know from when I bought the escape cash really does get the better deal but the dealership makes less as they aren’t financing it and will try to up sell everything at closing. I didn’t flash the cash and really think the sales guy thought I was just talking shit and wouldn’t buy it cash. I’m curious have any of you showed a stack of cash while bartering to get a better deal? I’m really debating doing it.

Clearly buying a new car would set us back a bit in my finance goals for this year, shit happens though. Its at that fine line to keep it or scrap it.

What would you do? Would you fork out another 1000 to keep it going or just scrap it and buy something newer? Got any tips for the sales process? Would you buy the newer car with more kilometers or get the older model with lower clicks.