Trading A Corus For A Dream 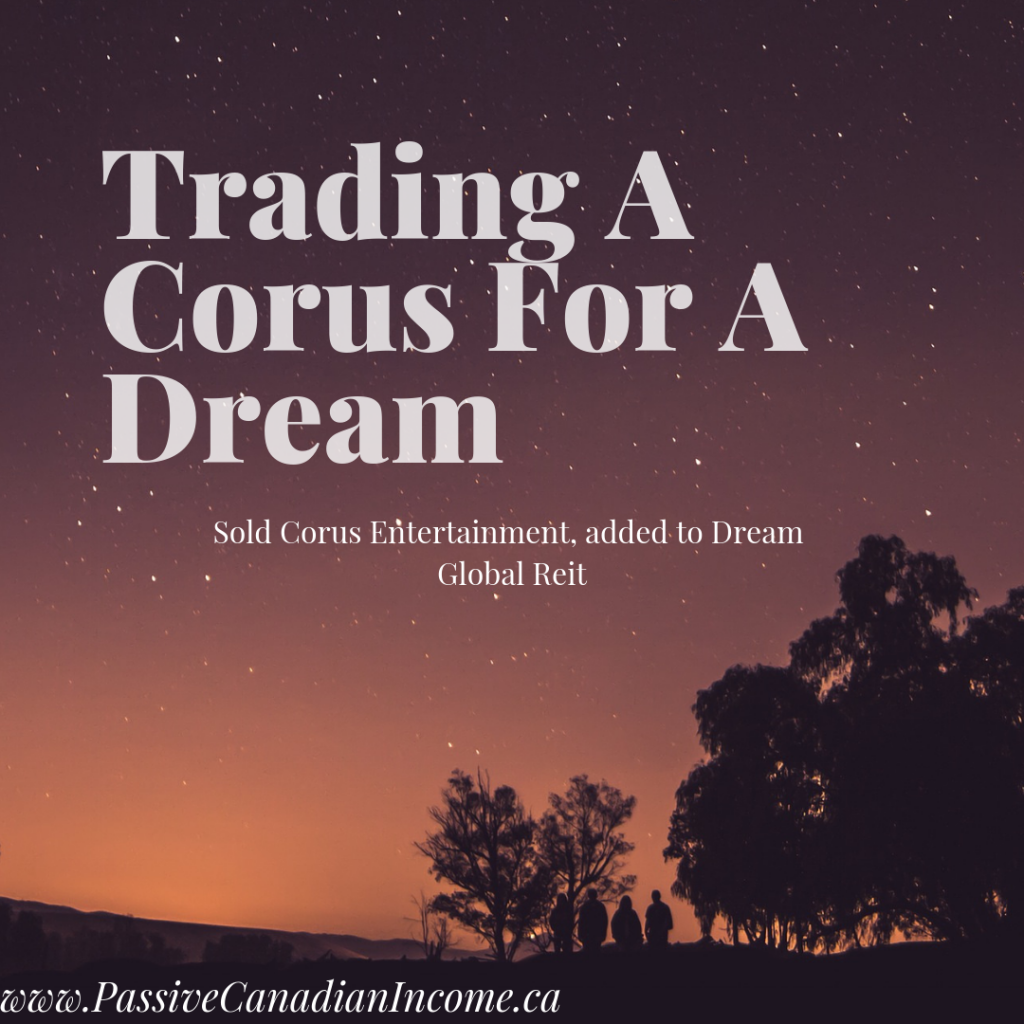 Trading A Corus For A Dream

This post is a little behind but I decided to let you all know my moves. As you have noticed I have been changing / improving my portfolio the last couple months. I want to keep stocks that, I see myself continuing to buy. If not whats the point of holding them if you don’t like the business?

This month Corus Entertainment had a earning report, and there was some positives that came out with the report, but one thing stood out to me. This report showed that their radio advertising revenue actually dropped by roughly 2%. I really didn’t like seeing that, as I felt that was something they basically had no competition with.

Now this drop may not be a lot but considering this is the one thing, that Corus really dominated and I felt wasn’t going anywhere (like cord cutting) and yet revenues dropped. I sold our shares.

I sold them at just over $5.70 a share and took a pretty sizeable loss on this position. Considering they cut their dividend and the stock saw a low of $3.70 after that, I actually don’t feel that bad about the loss. It worked out better than it could have, if I sold right away.

There still seems to be some positive news in Corus’s future as they are still a cash flow machine, and tv revenues went up. That radio decrease made me think it would be a good idea to move on. While I enjoy listening to the radio while driving, sometimes I do find myself sick of the same songs/ commercials and listening to some podcasts on my phone instead. This trend itself will probably increase with the rise of smart cars and ease of use between the vehicles and phones.

After the sale of Corus, we had some cash sitting around as well as a little bit more in our one tfsa. I felt it would be great to add to our position in Dream Global Reit. So we picked up an additional 107 shares at $12.86 a share. We started a position in them back in December and the stock has went up a bit since then, but I still feel they offer a good value and love the diversification it brings to the portfolio.

Does Brexit scare me with this position? No not at all, that is just noise. If the price of dream global reit drops, I’m sure you will read about me buying more in the future!

Corus was yielding about 4.26% and was bringing in 54 bucks a year after that dividend cut. The new purchase of dream adds $85.64, not a massive difference especially considering I threw some cash in there too.

There has been a lot of negative sentiment on corus for a long time now and I’m glad to finally pull the cord and exit the position. I’m glad I didn’t jump ship right after the cut, but also kinda regret not doubling up my position when it was soo cheap at around 3.50. That would of most likely evened out my average cost and maybe I would of broken even on this sale.

This is something I’m currently debating doing with Altagas. (Another one of my original stock purchases) I only have 30 shares, but its average cost is about 25 bucks. 1000$ into them now would drop that average cost wayyy down and hopefully I could sell when it breaks even.

What are your thoughts on this? Would you average down on a position you would like to sell? Or just take the loss/ keep holding. I do think Altagas is too cheap at these levels, but my goal is to stick to blue chips this year.

Anyways that’s my moves for this month, nothing huge. Trying to stockpile a little cash after the market rebounded so fast.