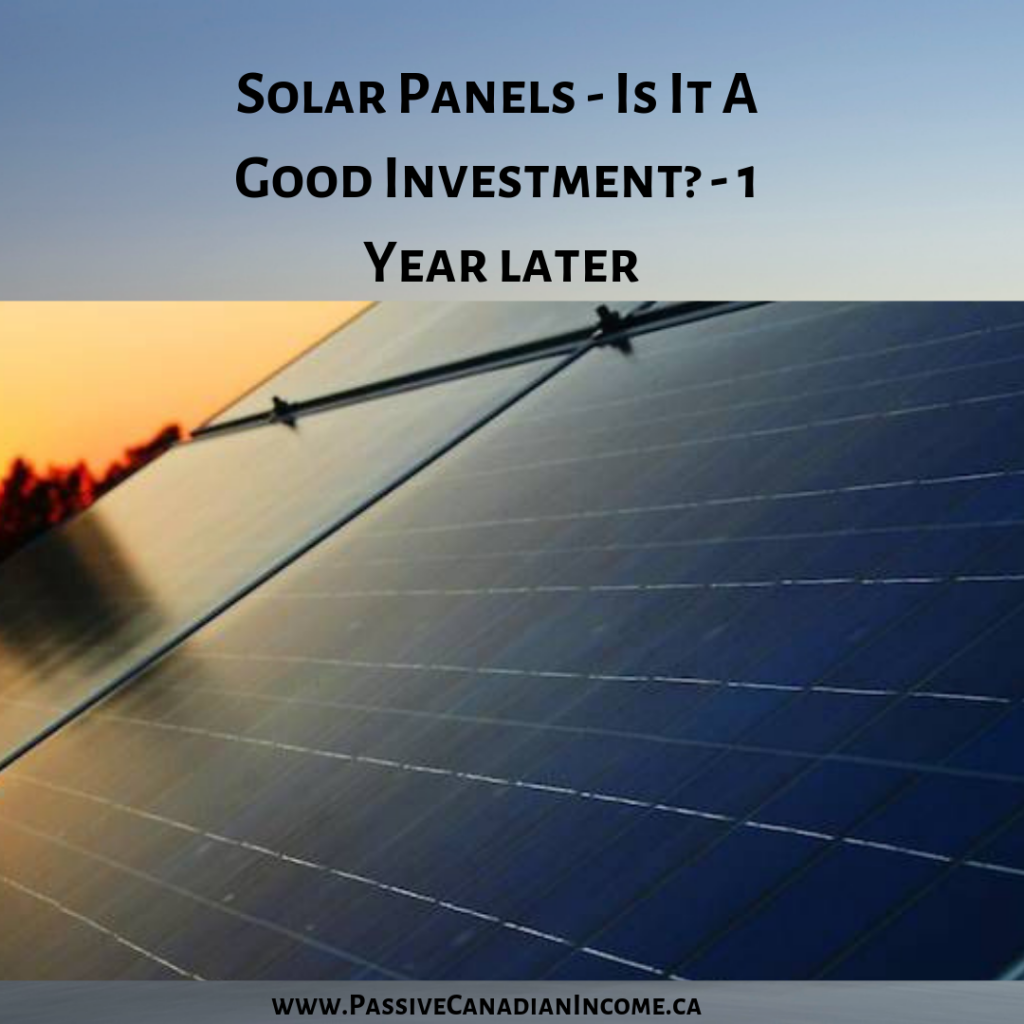 So I have officially had our Solar Panels on our roof for a year now. I can finally figure out our exact return after one year of it working. The system was installed right before new years last year. It was very exciting for us, as it is something I wanted for a very long time.

From the start of the process to the end was a very long process. It didn’t take to long to get approved by Hydro One, but all the paperwork and building permits made the process constantly drag on.

Since the system has been up though, I have literally done nothing. The money just gets deposited in our account every month and once in a while I log into the system to see if all the panels and inverters are still working properly. That’s it.

You can read about the whole process and the system size here. Basically it consists of 30 panels. 10 facing the south and 20 facing south west. The government was trying to promote green energy and created a way to boost the industry. If you were to spend the money on a system, you would get a 20 year contract to sell the hydro you generated to hydro one.

I got it the final year of the program, unfortunately the rates were a lot lower than initially offered. But still offered .2880 cents per kwh. Higher than we pay to get our hydro, but in 20 years maybe it wont be. At that time we renegotiate a new contract or maybe just keep the power for our self.

When we got the system we were told we would roughly bring in $2800-3000 per year from the system. Unfortunately we didn’t even hit the bottom number. We have a big maple tree that is blocking the 20 panels for a certain part of the day, so I definitely think that is what contributed to the lower than expected returns.

Since we get paid a month later, we were finally able to see exactly how the system did in 2018. This month we got $64.22 which was actually quite nice because it doubled our November total. Although halfway through November we got a lot of snow and that blanketed the panels, so that’s most likely why. (A big disadvantage to a solar system here in Ontario)

So How Did The System Do?

Well we ended up bringing in a total of $2,580.18 in 2018. Which means our system generated 8958.95 kwh of power. Pretty dam cool! This easily covered our hydro bills for the year. We average a bill of $110-130 a month for hydro. Yeah it’s under what they expected it to bring in, but I guess when your dealing with weather anything can change.

Here are the stats from the system.

So if we figure out our total return as a percentage it works out to 7.96%. Pretty good. I was hoping for a 8-10% return on investment and we are in that ballpark. Now the argument could come up that maybe if I invested that in dividend growth stocks, it would be a better investment. That could be true especially at the end of the 20 year contract, but I love being part of the green movement and having the Solar Panels on our roof.

I’ve stated it before how I think every house should be mandated to have panels on them. It would be so good for the planet and the income generated could help cover some of the costs of the mortgage and bills. California just mandated it on new builds, starting in 2020!

I’d also like to point out how we borrowed money for this system. Would I want to borrow money to invest in the stock market? Maybe, but its a lot more comfortable knowing that you have a 20 year contract to get paid back for your investment.

In the middle of 2017, we decided to refinance our house and use some of its equity to invest in various streams of passive income. The solar panels were one of them. So we didn’t actually get a return of 7.96% if we factor in the refinance.

We refinanced our house at a new rate of 2.59% so we need to take that off that total return.

So we ended up with a total return last year of 5.37% last year. Not bad, considering we used other peoples money! The Solar Panels also boost the value of our house and help diversify our passive income streams.

The income is taxable though, but we can write off the additional costs of house insurance and Generally, costs associated with the purchase and installation of renewable energy property are considered as capital costs of depreciable property, which are deducted over a period of several years, based on a prescribed percentage.This deduction is referred to as capital cost allowance (CCA). Generally, amounts paid for legal, engineering, installation, and other fees that relate to the acquisition of the renewable energy property, would be included as part of the capital cost of the property.

The CCA rate for Class 43.2 (Our system) is 50% per year, computed on the declining balance basis, and is subject to certain CCA deduction limitations as discussed in Question 7 below. (Source Cra)

To be honest I don’t quite understand what exactly that means. But I’m sure our accountant will. haha Maybe one of you accountants know. 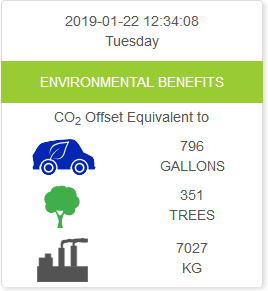 So there you have it, the results of one from our Solar Panels on our roof in Ontario.  A 5.37% return on investment from borrowing money from the bank. The system has had no problems, the roof hasn’t sprung a leak. All systems are normal. Just another monthly source of income, that we do nothing to get. Got to love it!

What are your thoughts? Do you have panels? Did you get a higher return? Do you understand the tax write offs?