Giving – Don’t forget to give back 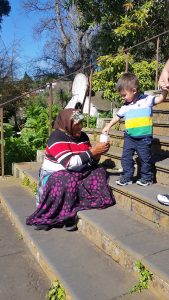 Giving – Don’t forget to give back

Being part of the fire community is fantastic. Always reading others posts on investments they are making, ways to save money and general financial thoughts and situations. The focus is mostly on saving money to invest to achieve financial independence at a younger age. There is no question this is great, but what about giving? I personally believe in Karma and think you got to give for you to receive. The world works in weird ways.

When we were in the Dave Ramsey stage and focused on paying our over $60,000 in debt, it was all about doing whatever we could to pay off our debt. Work as much as you can and sell whatever you could. He did preach about giving whatever you could and if you had no money, there were other options.

Donate your time to something you can to help the community. There are a tonne of options out there, being a landscaper I could work on community gardens or church’s etc. Volunteer at a food bank, homeless shelter, humane society anything! I went with something I always thought about but could never get myself to commit to. 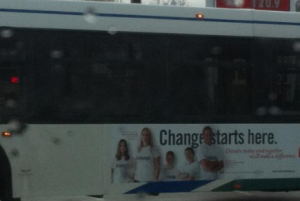 I decided to be a big brother probably around 2013 for big brothers, big sisters. It was a absolutely fantastic time but please sign up for the right reasons. When you start the process they interview you in a group and there were people with me who wanted to be firefighters and thought being a big brother would look good on the resume and nothing more. You are dealing with kids and this isn’t a short term commitment.

I was paired with a 10 year old boy who didn’t have a dad and things started slow but as time went by he really loosened up and we created a nice bond. I did this for 3 years with him until I could tell he was in that teenage stage and rather hang with his friends. So we parted ways, we are Facebook friends and talk the odd time, I think 2 years ago we met up for a little reunion. He stated how much I helped him growing up, doing guy things and talking about certain things. (Yes that’s me and him on the side of the bus, we became the face for big brothers for quite a while haha!)

I loved the experience and feel I gained a lot from it, they asked me to sign up again with a new little but our son was about 1 then and I wanted to commit my time to him. Signing up for something like this will bring both of you great joy but is not without costs. We hung out a couple hours every 2 weeks, sometimes we would just play basketball or something. A lot of time we would go out for dinner or something entertaining to do. If you ever considered volunteering for big brothers, big sisters I highly recommend it!

I think I have read one or 2 other bloggers talk about this. Blood, its in you to give. Seriously though why not? I have given blood a couple times, its painless. Well there’s a needle, so maybe it is. But you get cookies and juice! Canadian Blood services want you to relax a bit after giving blood to make sure your o.k. Which creates a great time to network with people in the community who like to give back as well.  Here in Canada we don’t get paid for the blood, but I think the states do. Correct me if I’m wrong. Giving blood takes like a hour of your time and you could seriously save someones life. That’s awesome! Instant feel good moment right there.

I don’t know if you have seen the Warren Buffet video. Its basically about his life, but he was married to a philanthropist who loved to give her time to good causes. She wanted to donate a lot of money but Warren said no. He would argue with her that he was so good at returns that when he died they would get a lot more money than giving to the cause at that moment. Mathematically I guess it made sense. She didn’t like it and they broke up. Now he pledges to give 99% of his fortune to philanthropist causes. 83% of that going to the gates foundations! Man that is awesome. 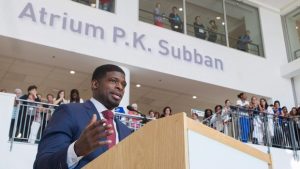 I remember when PK Subban signed a nice contract with the Montreal Canadian’s, soon after he announced that he was pledging to give 10 million over the next 7 years to the Montreal Children’s Hospital. I will always remember him for this.(Of course hes a great player too, come join the leafs!) That was huge, we always see players making these huge salaries but never hear of anything like that. Hopefully that gets the ball rolling and more athletes pledge these huge amounts of money.

I know most of us aren’t in the position now to pledge millions or billions to charities, but every dollar does help! We personally donate to a local bird aviary. They bring in injured birds of prey and nurse them back to health. They then release them back into the wild at public schools to get the kids engaged and teach them about the birds and what we can do better to protect them. They also do a lot of research on other birds as well. I remember being in grade school and seeing them let a red tailed hawk go into the wild. Since Ontario has put bans on a lot of pesticides the birds have really been bouncing back. I have seen snowy owls a couple times in the wild as well as bald eagles now. Truly incredible birds.

People as a whole are so smart and evolve quickly, yet pollution is so prevalent and species keep getting eradicated. Its really sad, I hope we change our ways before its too late, but that’s a whole different website!

We give to a couple other causes as they come up and one of my top goals at the moment is to have a bench with our name on it at a zoo or park sometime in our lifetime. (Something that will be around, even when we are not)

As I stated at the beginning I feel when we give back it comes back to us bigger in someway. It may not be financially but if its positive in some way, sweet! Generally we all try to be thrifty and save a buck to get us closer to financial independence, why not slot a bit of your time or money to giving? Giving just feels good, try to help someone or something. Do you volunteer or support any causes that you care about? If so which one/s?

As Gandhi said – Be the change you want to see in the world.