Canada vs Us Dollar History

Canada vs Us Dollar History

Good afternoon, It’s the time of month again. Time to make a purchase. I need more U.S exposure as well as a position in technology for the dividend portfolio. The purchase of U.S tech stocks would as Ricky from Trailor Park Boys says – “Get 2 birds stoned at once” The problem we have as Canadian’s is our Canada vs the US Dollar. Currently 1 dollar Canadian equals .74 cents U.S. This got me thinking about the currencies so lets look at the history. 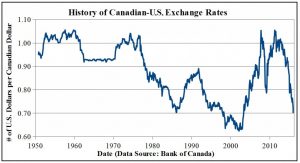 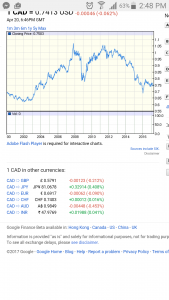 I came across these graphs, seems we are give or take ten cents from the bottom. Too bad I wasn’t much of a investor when we were at par or even above par. If I were receiving U.S dollars for my pay cheque I would be eating these Canadian Stocks up! The Canadian dollar is known as a commodity currency. When commodities are doing good the Canadian dollar generally go’s up.

There Are so many factors that influence the current exchange rate – Canadian Economic Growth, The Interest Rate Differences between the Countries, The difference in Inflation rates, Countries account balance, world commodity prices, the world economy, fear (U.S dollar is viewed as the safest currency) and investor sentiment.

From what I understand most world currencies gained in value relative to the us dollar in the 2000’s. In the 90’s people were spooked after the Asian financial crisis which started in Thailand and bought u.s dollar securities. The United States was also on a tear in the 90’s and people were making more money. They started importing more then they were exporting and had to raise funds in order to continue to buy imports, it does so by selling assets such as government bonds and private sector equities, as well as by direct foreign investment in US physical assets such as machinery, plant and equipment. Most economists think the u.s currency was overvalued in the 2000’s hence the correction.

I think the global financial crisis of 08/09 made people flock into the “safe” currency again and the Canadian dollar tanked relative to the value of the us dollar. Shortly after as the world recovered, commodities were in high demand and the dollar started increasing in value. A lack of confidence in the U.S dollar had people selling and converting to Canadian securities to get on board the commodity train!

Since 2011 the Canadian dollar has been slowly going down relative to the U.S dollar. I don’t really understand why, although the U.S federal deficits have declined sharply down from 10% of gdp in 2009 to 3.2 of gdp in 2016 and projected 2.6% this year. Of course the increase in interest rates in the U.S is a big factor and they plan on having 2-3 more increases this year. Trump seems to be really boosting the U.S economy with what tax plans and more in house jobs.

Will Canada follow suit? I really don’t know, I think our housing market is carrying the economy currently and with Canadian’s at all time high debt levels a slight increase could seriously hurt some people. I would think we will raise it maybe a quarter percent since we don’t want the loonie to fall to much. When certain commodities pick back up I think the dollar will increase but I don’t see oil going up much soon.

What Are You Doing?

Would you bite the bullet and just buy the U.S stock you want ignoring the current exchange rate? The dividend will be in U.S dollars so that’s nice. Currently if I convert my 1400 dollars to U.S, I would get $1039. Or would you buy a Etf with exposure to the S&P 500? I believe if Trump stays off twitter and stops “poking the bear” the U.S dollar will only increase. If he keeps poking scary times are ahead of us.

What are your thoughts?