Canadian’s leads the world in….. debt?

Canadian’s leads the world in….. debt?

Well this isn’t going to be a happy go lucky post. Unfortunately this is something us Canadians have been hearing on the media for at least the past year. Sadly the numbers are only getting worse. Canadian’s leads the world in….. debt? YUP its true, our household debt has now passed 100% of Gdp. (Gross Domestic Product) 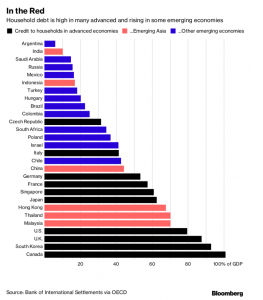 If you look around in Canada, housing is expensive. I see the prices on some U.S homes and just think wow. To put it into perspective our house will now sell for about 700k (Ontario), crack house’s in Vancouver sell for a million dollars. Other provinces are cheaper but as Ontario and Vancouver try to stop/slowdown the red hot real estate market by applying more taxes the other provinces are increasing in price now. Affordable housing is becoming a big problem in Ontario and Vancouver, pricing people out of the market.

Our first house we owned was a basic 1300 sq ft townhouse. It now sells for about 400 thousand and comes with a $420 monthly condo fee payment as well as a roughly $3000 yearly property tax bill.

When I read about Jason Fieber (Mrfree@33) moving to Thailand to live a way lower cost of life, it really gets me thinking. We could basically sell everything – Invest the proceeds, like he did and live someplace cheap. Essentially achieving fire (Financial Independence Retire Early) instantly. My wife is Filipino, the Philippines would be a great choice. (I’m a white boy with a big nose, people would love me in the Philippines) She doesn’t like the politics down there and all our family lives here, so that won’t happen. It would be nice though! 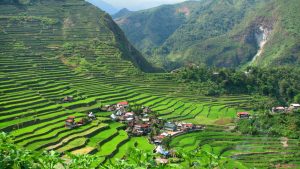 Cars around here are all new these days, seriously! I drive a 2005 escape and the wife got a 2006 Civic. These are old cars, it seems. I really don’t care though, they still look nice and are completely paid for. I wouldn’t mind a upgraded stereo for my car but I can always turn the volume down and listen to podcasts on my phone with the volume all the way up.

As you may know I’m a landscaper by trade – Financing is getting asked about more and more. Will you take credit card? Can we work out a monthly payment schedule? Yes people finance Landscaping! Even small projects, like a couple trees. We are just a small company so we don’t do these. I don’t know if people realize the added expense of this stuff. Credit cards for example will charge a 3% fee, but I get 1% cash back they might justify. Do the math….

Anyways a quick look at the stats Canada website paints the picture. In 1980, the ratio of household debt to personal disposable income was 66%; that ratio passed the 150% figure in 2011. (Statistics Canada 2011). This means that, in aggregate, households owed more than $1.50 for every dollar of disposable income.

In September Stats Canada released new numbers – household credit market debt as a proportion of household disposable income increased to 167.8 per cent, up from 166.6 per cent in the first quarter. A slow incline. While the increase in the debt ratio came as household net worth on a per capita basis fell by $1,300 to $285,900.

So our debt load’s keep increasing, while our net worth is dropping? Us Canadian’s aren’t buying assets..

Clearly this is something Canada is keeping a close eye on, Can they keep raising the interest rates? The whole world is watching what will happen. The IMF (International Monetary Fund) is worried about us.

We all know that saying – The rich get richer. I’m not rich (yet) but if things do start to crumble here, I plan on taking advantage of it. I think people are so leveraged that prices on stuff will be dirt cheap. All those new cars on the road? They have payments, and when people cant afford them there will be a lot of inventory. Maybe I’ll upgrade our cars then. I set a goal of having  a rental property by 2021, maybe this will create a fantastic buying opportunity that we can’t refuse. Cottage, Sure why not?

I always wanted a ATV (we back onto a massive farm field and forest) but can’t justify a couple grand on something. If the price is right, maybe! The tsx? Yup stocks will pull back, and that would be a great time to stock up on the Canadian banks. (Remember the states? I think Bank of America went to a couple bucks a share in 2009)

I believe government’s in general need to start teaching about financial literacy a lot sooner. Ie start them in grade 1. I never use algebra in the real world, but I sure do have to track accounts payable/receivable, taxes and retirement. We touched on these subjects in High School but never got schooled in them.

Now I want to conclude by saying Canada’s banks are solid, most houses are insured. The government has been putting steps in place to lower the chance of a big crash. It is now harder to get approved for a mortgage. They say housing in general should pull back a bit in 2018 because of these rules.

Life is good, I don’t want to instill fear in anyone. I’m not saying a crash is coming anytime soon, but eventually one will come. They always do. With Canadian’s setting new records almost every quarter in debt levels, I just want to bring this to point. If you are currently in a lot of debt, start hammering that down and be prepared to take advantage of the situation if things do pullback. Don’t complain after the fact, that the rich get richer.